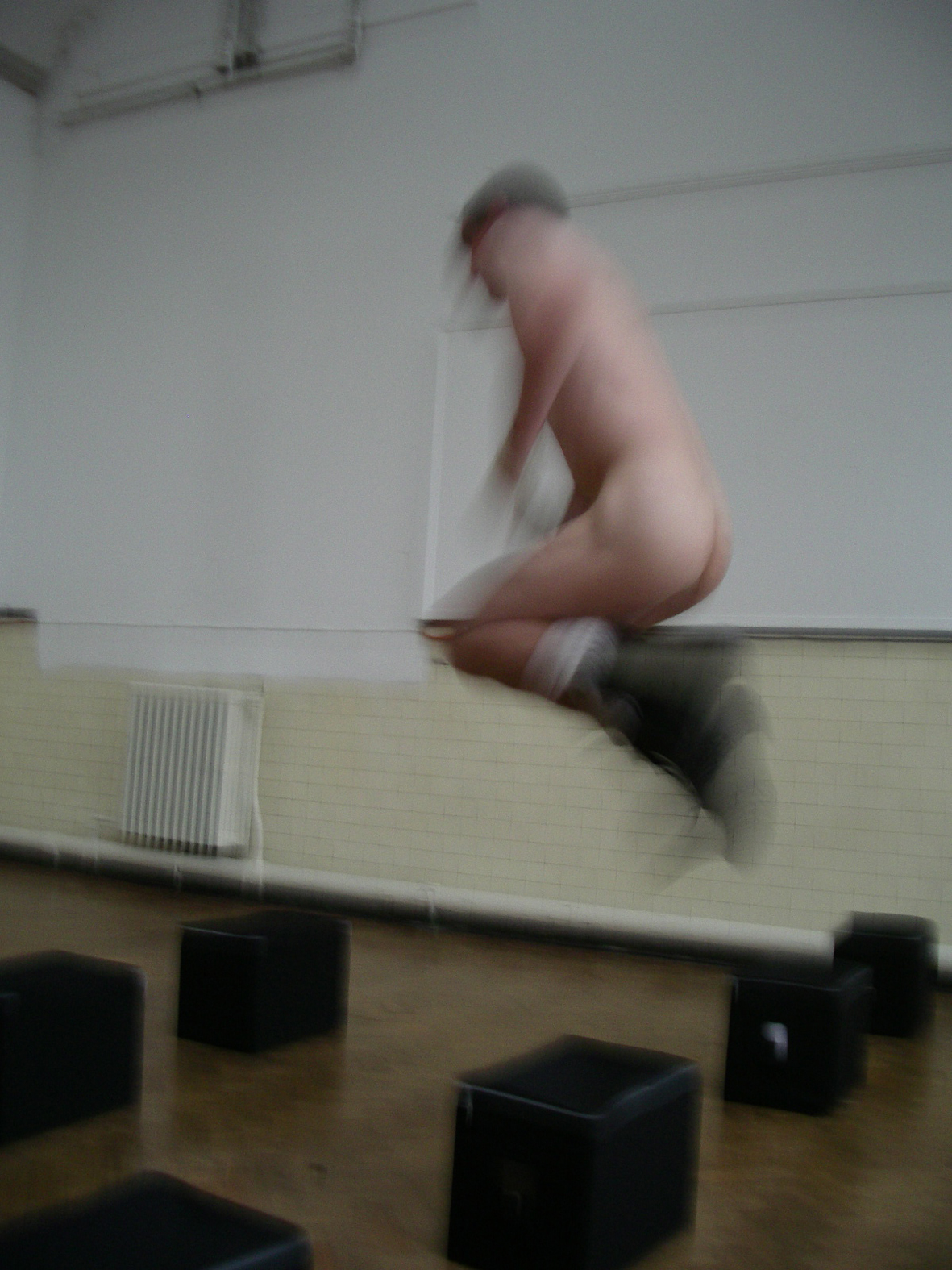 There is video of “Mas o Amser”, or rather two videos of two different versions, one of a version that Richard performed with guest performers in Gijon, Asturius (2009) as part of a British Council showcase, and one in Potsdam (2010) as part of a dance festival. We don’t have either.

What we do have is the following article jointly written by Prof Mike Pearson and Dr Heike Roms when both were at the Department of Theatre, film and Television Studies, University of Wales, Aberystwyth. Unpublished (to our knowledge) until now, this text was written in response to the initial production at Chapter Arts Centre, Cardiff, in 2007.

mas o amser involves the most accomplished application of ergonomics and revelation of their potential in performance that we have ever witnessed.

We might regard the environment or mise-en-scène of performance as the workspace of the performer. Whatever the degree of verisimilitude of scenography and objects – whether they are made of cardboard or rusty iron – it provides a set of material conditions that allows the performer to go to work. Here the nature of the contracts – body to backdrop, body to object, body to body – and the physical and emotional experiences they conspire may be other than those of everyday life. Beyond questions of representation, the performer’s relationship to the setting is therefore above all phenomenological and ergonomic.

Ergonomics concerns the relationship between individuals and their working or living environment and the application of information about human physicality and behaviour to the problems of design. The designed or built environment of performance may greatly increase or decrease ergonomic problems and these may change from moment to moment, oscillating between acceptable, unacceptable and optimal. We might assume that theatre tends towards a perfecting of conditions that enables the maximising of efficiency. The polished, hinoki-wood floor of Japanese noh stage allows the ethereal, gliding movement of the performer; the relationship is a symbiotic one – it would be difficult to assess which came first, floor or movement. Here the delineation of area and the formalisation of the performer/spectator relationship lead to an elaboration and perfection of performance techniques and technologies within an unchanging set of material conditions. However it’s not always the case!

The scenography of performance may also extend, limit, restrict or compromise four vectors of physical application: clearance – the head-room and leg-room of the body envelope; reach – the volume of the workspace envelope; posture – the nature and number of connections of body to work space and strength – the acceptable percentage of maximal strength in output or endurance. It may restrict the signalling abilities and capacities of the performer through increases in hazard, stress, demand, overload: by the closure or limitation of sensory channels, as with blindfolding; by the inappropriate invasion of personal space (that psychological bubble with invisible boundaries reserved for more or less exclusive use); by the arrangement of barriers, such as set or furniture – hence the old theatrical adage: Don’t walk into it! It may cause duress through limiting the potential adjustment of posture and reach and increasing the durations necessary to complete tasks. The negative environmental factors may include excessive noise which causes annoyance during thinking and communication; fluctuating illumination with changes in brightness, reflection and shadow; climate changes in the temperature of air and surfaces, air velocity and relative humidity – the effects of which may, or may not, be mediated by clothing; vibration of whole body or hand-arm through shocks and jolts; and danger from the toxicity of liquids, gases, vapours, dusts and solids. And when all this occurs in performance it can e a difficult – or even dangerous – place to work!

The definitions of an ergonomically ideal job – that it ought to consist of more than one task, to involve problem solving, to have a working cycle longer than one-and-a-half minutes, to alternate between easy and difficult, to include individual decision making, to provide sufficient information to control the task and to be carried out in a communal situation isolation – indicate just how problematic the conditions of some manifestations of performance might be.

It may be that the constructed environment of performance is active and that environmental conditions – surface, climate, illumination, temperature – are much better or much worse perhaps than in daily life, changing from moment to moment necessitating the substitution of real tasks and patterns of work for stage illusion and theatrical gesture.

Indeed, the very substance of performance may be constituted as no more than the performer dealing with the ergonomic problems of the workspace. We watch his methods and organisation of effort, his flexibility of response through improvisation and his use of tools, both designed and improvised. In order to deal with ergonomic problems, he substitutes the completion of real tasks and patterns of work for stage illusion and theatrical gesture. His methods of coping may include those planned, those improvised and those informed by previous experience.

Much performance art is based upon the interplay of strategy and tactics in coping with difficult material conditions. mas o amser is, above all, based upon one simple scenographic and ergonomic problem: the constant movement and arrangement of the black boxes. We watch John and Richard’s relentless dedication to the task, witnessing their stamina and endurance without ever knowing where this is leading and for how long. But we are constantly aware that we are watching real responses, real sweat, that we are watching the symptoms of their engagement with workspace. And that this is a serious business – the same application of ants and relief workers and the ‘human robots’ at Cernobyl. With or without reason…

And this effort congeals into one startling moment. As Richard attempts to push a line of boxes the effort defeats him. His body is locked, almost horizontal with the floor, every muscle engaged, in an extraordinary sculptural pose. And in this frozen image is the perfect representation of human endeavour and frailty, achieved not by dramatic illusion but by the real collision of physicality and materiality

Funded by the Arts Council of Wales in colaboration with Chapter, Cardiff and Wales Millenium Centre